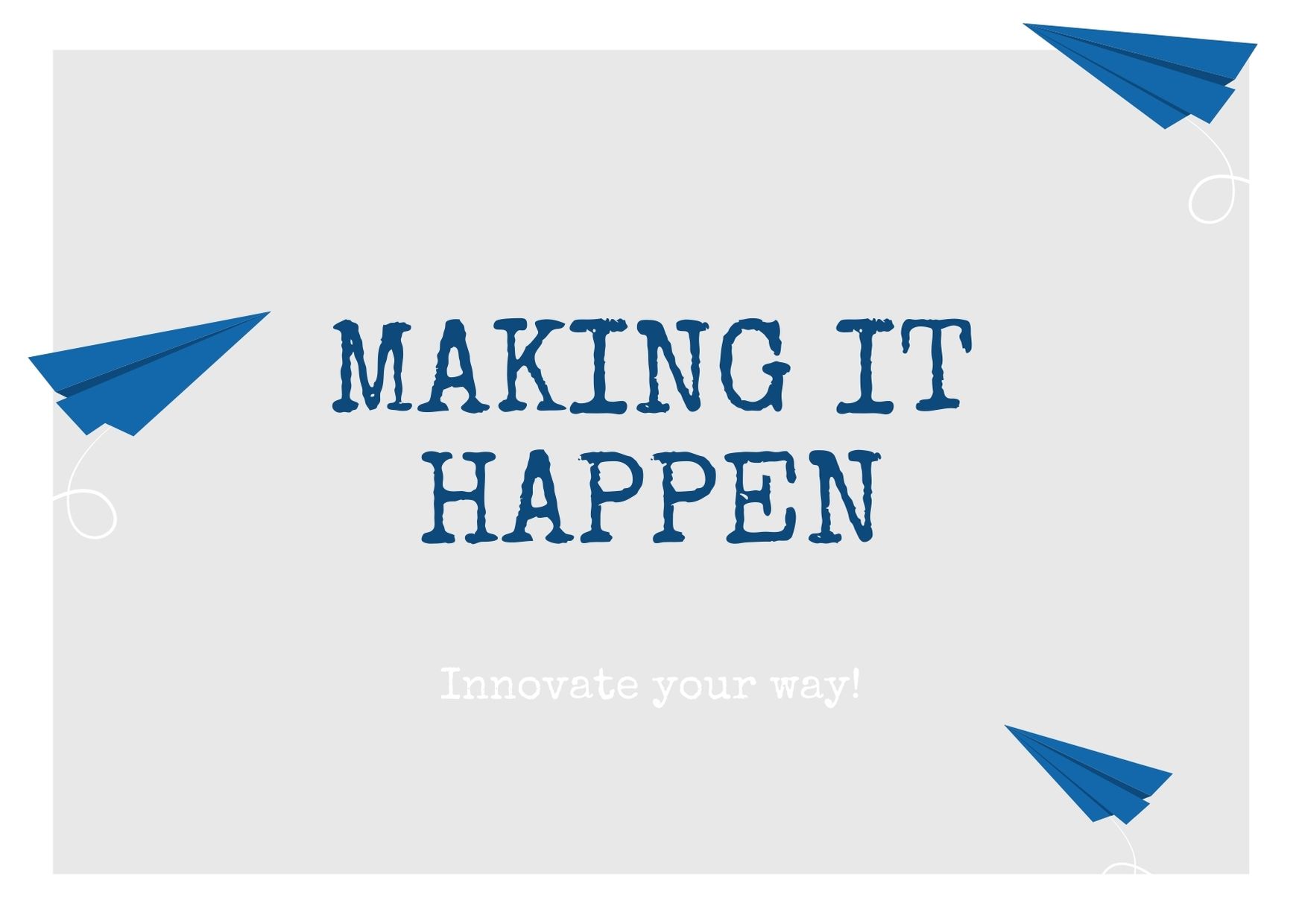 No matter if we are speaking about a project at work, a startup or achieving a personal goal, how do you make things happen? Do you aim to innovate when it comes to the methods of accomplishing your goals?

As per the Government of New Zealand, “Innovation is the creation, development and implementation of a new product, process or service, to improve efficiency, effectiveness or competitive advantage”. To do it, you would need to apply some standard project management methodologies at least. All things being equal, some methods might be better than others depending on what you want to accomplish.
Still, doing things exactly as others will only leave you room for improvement through the efficiency of the execution. Why not being creative in developing your method to making it happen?

I am going to propose below a method I developed on my own for a personal project. First, think of a rather big goal that you want to achieve. Chose one that would take at least a year or two using the standard waterfall project management approach. You can argue that perhaps using an incremental, iterative method like agile might work better. Still, both methodologies have their advantages and disadvantages. There is plenty of so-called literature on the web about both. I would argue that waterfall lacks flexibility and reduces your options to adapt to new developments unless you constantly revise the plan, while the agile method is flexible but lacks predictability, requiring more effort to coordinate sprints to achieve the desired end state. With your goal in mind, which one would you chose for making it happen?

What if you divide the goal into several parallel smaller streams that are easier to achieve? Then, you push each of them in parallel. It is similar to the parallel development method, although you do not need multiple teams for it and I would encourage you to have backup streams too, in case some do not materialize.

The main advantage of this approach is that the smaller goals are a lot easier to reach. Also, progress on any of the substreams of the original goal will be rewarding and encouraging. By developing the streams in parallel, you might achieve considerable time savings reducing the overall duration.

The main disadvantage is that you would need to manage several projects in parallel. Show me a professional who can not do that, I will question his professionalism then. Another disadvantage is that one or two streams might get stuck and fails. You can address that by having backup streams. They will serve as alternative ways of obtaining the same result in case the first chosen ones are not successful.

Some of you might get lost in the theoretical explanations, and I could continue them for pages. Perhaps a practical example would exemplify it better. I did implement the above method for it. It is how I developed it in the first place.

Let’s say that you need to come up with a 35k budget for a new car. Doing it in the waterfall approach, you might start saving and based on how aggressive you are in your saving strategy, you will end up with all the money at a future date, assuming you had the discipline to follow the plan. Alternatively, you could borrow the money, but, think twice before doing that, saving the interest rate worths additional effort. Alternatively, applying the agile method and saving/earning based on two weeks / monthly sprints might work. Still, it is going to be hard to predict when you will have the complete budget.
Applying the method from above, you would divide the total budget in 5k to 10k smaller chunks and then create plans to get them. Yes, you will have a different plan for each stream based on its particular requirements, but, is a lot easier to make 5k or 10k instead of aiming at the whole amount of 35k. Please take the numbers only as examples. I did not put a currency to them on purpose, to let you chose your measuring unit. Yes, you will need to manage each project separately and push each stream in parallel. And yes, one or two streams might prove to be impossible, one or two backup ones might be handy. Still, by developing each stream in parallel, you would be able to reach your bigger goal a lot faster. For me, it was roughly between 3 and 4 months instead of 2 years. Also, each stream will seem easier to realize, which will give you more courage to reach for the bigger goal.

I would encourage you to use this method for particular goals where it can be applied. Assessing the goals and dividing them would be part of a consultancy effort, while further explaining the method could fall under the coaching and mentoring services.

What is your opinion on this?